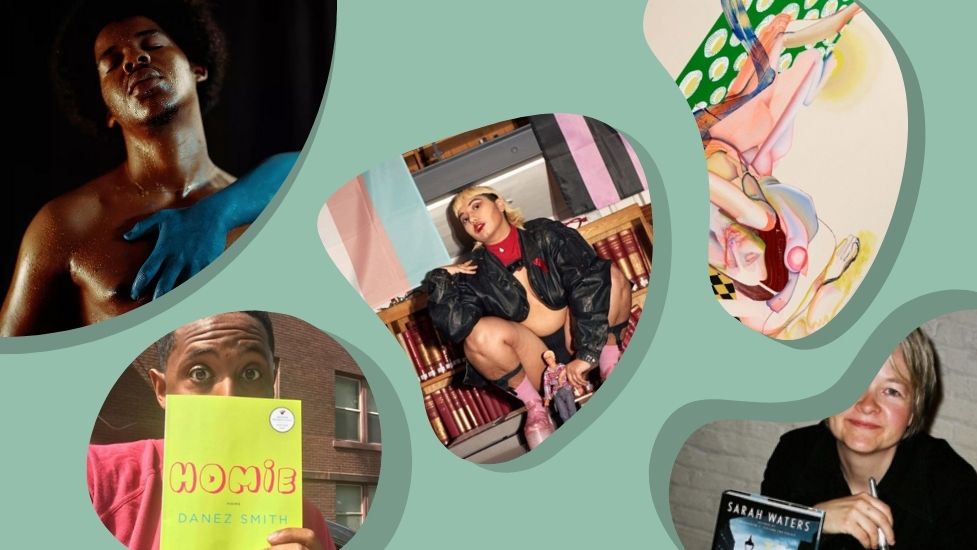 LGBTQ+ artists and writers that you should check out

Art; whether classic, contemporary, written or physical, remains an inclusive way to express cultural and social themes. The world today continues to be inspired daily by artists in almost every field. H﻿ere are our recommendations of queer artists that you should check out!

Danez Smith is a non-binary African American poet, writer, and performer. Their poetry collection Boy (2014) won the Lambda Literary Award ﻿for Gay Poetry and the Kate Tufts Discovery Award.  Don’t Call Us Dead: Poems (2017), another collection by Smith, was a finalist for the 2017 National Book Award for poetry. ﻿

She mentioned in a recent interview, "As a woman, as somebody who's queer, it's important to me to not perpetuate the passive consumption of the body. But it's also what I love to do, paint the body. So, I try to find ways to not allow for a passive reading. I see my work as exploring the ambiguity of identity”

My first cover is the trailblazer @LilNasX for The New York Times Magazine @nytimes 🌊🌊🌊 Styled by Hodo Musa x Hair by @Callmetopboss 🙏🏾 pic.twitter.com/Ksyw8MvddE

﻿Shikeith is an American practitioner whose work explores psychology and black masculinity through various mediums of conceptual art. These include film, photography, sculpture and installations. He investigates themes to do with sexuality, euphoria, and the construction of Black male identity within society. ﻿What is deemed as masculine among black men and whether this is beyond the physical idea of the persona, is a conversation that he brings up within his art.

His work and photography have been featured in magazines and galleries, such as his campaign with Lil Nas X in the New York Times Magazine. ﻿

Known for her fiction novels, Sarah Waters writes tales of lesbian protagonists, usually set in Victorian England. Tipping the Velvet (1998) is one of her most popular novels featuring a lesbian romance. The book did incredibly well and got its own TV adaptation as well as a stage play at Lyric Theatre in Hammersmith.

She mentions the time she was writing the book in the “mid-90s as a rather electric time to be gay, and young, and living in London. There was a lot to be angry about, but also a lot to celebrate and relish.”

I’m on my way to the library right now!

As an artist and film maker, Vargas uses art to explore queer and trans values within media and pop culture. In 2013, he also founded the Museum of Transgender History and Art (MoTHA), a project dedicated to the representation of transgender and gender non-conforming historical art.

The museum itself is in San Francisco but you can have a look at his video work on his website!

Katy Jalili is an Iranian, gender-queer artist, writer and performer who is currently based in London. They graduated from Central Saint Martins and continue to explore themes of feminine identity and its place within society. They explore body image and aim to provide a voice to more diverse creatives, particularly the queer community. You may have seen Katy around campus, giving lectures at Central Saint Martins!

"Living as a queer person of colour, an immigrant and a person that is subjected to misogyny forces you to be bold and claim spaces."

We hope you like our recommended LGBTQ+ artists and let us know your favourites by tagging us on Instagram (@ualsocial). You can also share your own work and be featured in our Student Spotlight!

Have a look at our club night at  Zodiac and book your space or check out our other events happening with UAL Social.   ﻿

Want to know more? Get in touch: